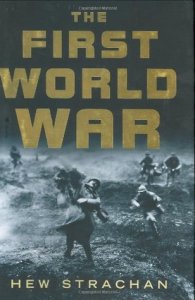 This single-volume history of the Great War is apparently the companion volume to a television documentary series. It’s well written, especially the section “The Tools of Victory” in the final chapter. I enjoyed the author’s voice and writing style; in particular, how he showed his sense of humor, and his occasional use of very short sentences to grab the reader’s attention when introducing a new paragraph, or when making a point.

Nicely executed line maps of the theaters of war preface the text. The book is heavily illustrated with black-and-white photographs, and although many of them are of a small size and dark enough to frustrate a reader interested in seeing details, they are almost all unique, making a valuable archive for the researcher. An excellent feature is the central glossy section of rare, genuine color photographs from the period (not colorized), which had been produced using the potato starch technology discussed in this article in the online Smithsonian Magazine. There is no bibliography, but the end notes are well documented, and there is an adequate index.

Unfortunately, I cannot give Strachan’s The First World War an unqualified recommendation, because of the following issues:

The first is the presentation of the book. This edition is a sturdily bound hardcover that should be able to stand a lot of use as a reference work; however, the dust jacket leaves much to be desired. In addition to its being an amateurish composition, the photo chosen for the cover falls somewhere on a spectrum that runs from poor taste to outright insensitivity, because it seems to portray a French soldier in action, at the moment of his wounding or death. After all my years of research, poring over hundreds of battlefield photographs in order to get a feeling for the times and places and events, I feel inured to gruesome sights of the shell-shocked, wounded and dead (sometimes long-dead), but the placement of this picture smacks of a discomforting disrespect for its subject.

My second and third gripes will be familiar to my regular readers: the issue of War Guilt, including the Kaiser’s role; and the character of Douglas Haig. The author of this history is one of those who take the stand that none of the belligerents was really “responsible” for the war; he scoffs at the idea of Germany’s having distinct imperialistic aims for a war of conquest from the beginning (he does not even mention Fritz Fischer’s comprehensive research in this area); and the little he says about Kaiser Wilhelm II is a bit too soft a treatment for my taste. Haig is also handled with kid gloves, with very little said about his true beliefs (which are revealed in the man’s own diaries), as well as a startling assertion of his “loyalty” to his subordinates, when details documented elsewhere provide contradictory evidence.

Finally, the author’s statement, “Given that the United States was itself a community made up predominantly of immigrants, Wilson’s presumption against multi-ethnic empires was arrogant and naive,” exhibits an utter misunderstanding of the role of the immigrant in the United States of America. Immigrants voluntarily came to the USA to leave behind the oppressive conditions they lived under in the “old country,” in which most of them were subjects of monarchs, not citizens of nations. Their goals included becoming United States citizens with fundamental rights that were not abridged because of their ethnicity. This is in distinction from multi-ethnic empires whose laws generally favored a dominant ethnic group, which resulted in universally discriminatory political and socioeconomic classes.

There is no doubt that during the early 20th Century there was widespread stereotyping of ethnic groups that often became overt prejudice, but as time passed, assimilated immigrants and their descendants began to move out of the segregated ethnic zones they had originally inhabited (such as “Little Italy,” Chinatown, Polish neighborhoods, and “company towns” built for French coal miners), and into the general population. Only two ethnic groups still encountered widespread difficulty with assimilation in the 20th Century, partly due to the persistence of their segregated settlements, and partly due to mismanagement of their legal status during the 19th Century: indigenous Americans (who had been displaced to reservations by immigrant settlers), and blacks (many of whom were descendants of slaves who had been imported early in United States history, and whose legislated rights were abrogated by former Confederates reacting to conditions imposed on them during post-Civil War reconstruction). Otherwise, ethnicity in the USA assumed a different role, as naturalized immigrants and their descendants identified themselves as Americans of a particular descent, as manifested by their surnames and the cultural traditions they chose to retain (typically religious, food, or festival-related, not political).

I can speak from experience on this subject, because my ancestors came to the United States at the very end of the 19th Century and during the first few years of the 20th. My grandfathers were immigrants, and my grandmothers were first-generation Americans born to my immigrant great-grandparents. I knew several of my immigrant ancestors, who refused to reminisce fondly about life in the Old Country (which tended to be nasty, cold, brutish and short), adamantly maintaining that that was the past, and they were Americans, now.

Enough said. Read Strachan’s The First World War for its factual information value, and to enjoy a style of telling history that’s not as stuffy as many history books end up being written.