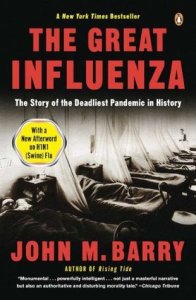 The Great Influenza: The Story of the Deadliest Pandemic in History.

Public health all over the world was undermined by the Great War’s waste of resources, which resulted in food rationing and inevitable malnutrition. The slaughter in the theatres of war also encouraged the proliferation of vermin and the diseases it carried, invading whatever limited foodstuffs existed, colonizing whatever substandard shelter remained, and contaminating water supplies and inadequate sanitary systems that had been shelled back into the Dark Ages. There was also the overload on health care, and the loss of medical and nursing professionals to both combat and contagion. By 1918, conditions were right for an opportunistic virus to make a bad situation even worse.

The difference between the “Spanish flu” pandemic and the seasonal illness that comes around nowadays, is in their choice of victims, and how those victims die. It’s mostly the very young and very old who are susceptible to the seasonal strain, and although they may get over it, many will die of pneumonia, afterwards. Back in 1918, the virus was a strong enough strain to cause a fulminating respiratory infection that could carry off its victims rapidly on its own (although pneumonia also claimed its share), and the flu’s favorite targets were young people in their prime reproductive years.

Unfortunately, as a chronicle of the public health disaster that was the flu pandemic, The Great Influenza is One Great Disappointment. Pop history at its worst. Purple prose at its most cloying. (Things have come to a pretty pass when a novelist who writes in the lyric-literary style of an Irish journalist, is revolted by written melodrama.) This book could have been shortened by 2/3 with no loss of factual matter, nor of anything substantial in scholarly analysis or commentary.

The best part about the book was the section of period photographs. Word-wise, the book’s only redeeming value was to teach that flu is a respiratory disease, not a gastrointestinal illness. This means that, contrary to popular belief, there is no such thing as “stomach flu.” Most cases of gastroenteritis are due to improper food handling: You may wish you were dead, but with appropriate care you’ll probably recover quickly, clean out your fridge, and vow to take better care when cooking, storing and reheating food. A person who has influenza and has become septic can also experience emesis, but that’s a late symptom that can accompany any overwhelming infection which is well on its way to causing fatality.

Both the Great War and the great flu constituted horrific drains on human potential. Between the violence and the virus, the gene pool from which humanity needed to fish, to supply the best minds for shaping the 20th Century, shrank by many tens of millions of sets of DNA. This loss of genetic diversity reached into Jim Harrington’s life: by the time he came home from the war, he had lost his fiancee to the flu, and he did not seek another partner to marry and have children of his own. Eventually, good finally came from his loss, when 20 years later, he married my widowed grandmother, helped raise her son and two daughters, and became a loving grandfather to his step-children’s children.